The Company Behind The Universal DevOps Solution is Entering the Chinese Market BEIJING, Feb. 23, 2017 /PRNewswire/ — JFrog, the leading DevOps accelerator, is announcing its expansion into the Chinese market. With the expansion, JFrog is announcing Jiewa (“the magnificent frog” in Mandarin) Technology, which will also provide local technical support and DevOps services. 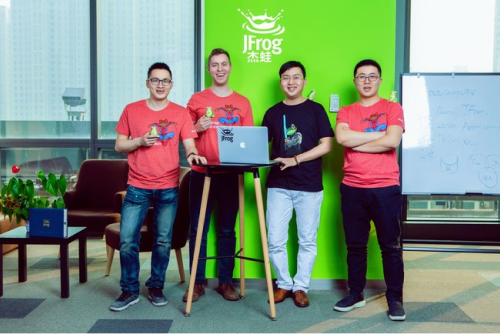 JFrog is on a mission to empower companies with the ability to release software faster through universal solutions for the management, distribution, and security scanning of binary software artifacts. With its new expansion, JFrog is continuing to solidify its status as a global solution for software development organizations, in multiple industry sectors throughout the world.

A Chinese-language website will be launched to support the local community, jfrogchina.com, which will include JFrog’s technical documentation and will also be hosting marketing events and webinars throughout China.

The company has already begun working with some of China’s top companies, including Huawei Technologies, China Merchants Bank, Tencent, and Didi Chuxing.

China’s leading ‘High efficiency Operations’ (GOPS) community Founder, and DevOpsDays China co-establisher Xiao Tian Guo said: “The timing is perfect for JFrog to enter the Chinese market. JFrog already has a significant number of important customers in China and this is just the beginning of JFrog’s growth as local enterprises realize the value of fast software releases and automation. China’s largest enterprises are embracing DevOps, and JFrog is the leading universal solution to accelerate this adoption.”

“It was important for us to begin our Asian expansion in China, as it’s one of the most advanced and competitive markets for software development,” said Shlomi Ben-Haim, CEO of JFrog. “We already have some of China’s top companies as enterprise clients who implemented Artifactory and Bintray, and we plan on continuing to provide a truly universal solution for the DevOps world. We’re excited to announce our local leadership team in China, headed by George Hurn-Maloney. George brings an amazing combination of vast experience in the DevOps domain and the Chinese market. George will lead the local team that will build an access road connecting the local DevOps community in China with JFrog.”

The company received $50 Million in funding at the beginning of 2016, that is deployed into its hyper growth. JFrog is privately held and operated from Israel, California and France. More information can be found at jfrog.com.

Founded in 2008 JFrog happily serves over 3,000 customers, and powers the open-source community with over 1.3 Billion downloads of binaries a month. JFrog was also recently ranked by Deloitte as one of the top 50 fastest growing technology companies for the second year in a row, and voted as one of Silicon Valley’s fastest growing private companies.

Back to News Articles